Dark Side of Cyberspace Fable 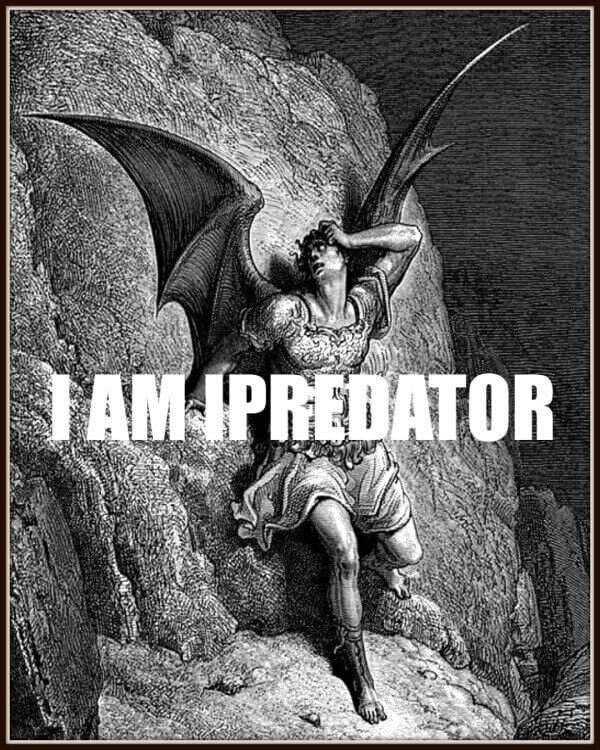 I am iPredator and writing to introduce myself. You have not heard of me, with my present moniker, but I was here long before you and will be here long after you are gone. Over the millennia, since the beginning, I have been given many names, reasons for existing and places of residence. You cannot see, hear, touch, taste or smell me. Nevertheless, I assure you, I am real. So real, I walk unfettered throughout the universe and amongst all humanity preferring to hide undetected and quiet. I do not require an abode because I reside in you. My home lies within your soul, mind and conscience. This letter is my way of saying thank you for your invitation, which I gratefully accept.

As I had predicted long ago, which will be true ad nauseum until end time, you have once again created a portal allowing my long-awaited return. In a mere five decades, humanity has created the realm you call cyberspace. As you may know, cyberspace is defined as a global network of interdependent information technology infrastructures, telecommunications networks and computer data processing. How eloquent a definition for a realm that created a portal for me to visit. All I can say is that I am honored you would create a digital realm where you, myself and all humanity can interact with one another free of having to disclose our true identities.

To me, cyberspace is nothing more than an abstract artificial universe connecting every human who enters and offering you the ability to effect and influence each other. Moreover, the last time I checked, three plus billion of you are connected in cyberspace. The beauty of who I am, being an immortal and infinite construct, is my capacity to practice pristine patience. Using basic mathematics and laws of probability, it is safe to say, within the next century that 100% of your kind will be active and dependent upon Information and Communications Technology (ICT). Without sounding too facetious, your growing dependency upon information and ICT is an addiction I fully support and encourage.

Just as a knife is used as both an implement for cutting and as a weapon, ICT is a tool serving to connect humanity to cyberspace. From this connection in cyberspace, a planetary digital thread connecting all humans is born. Having incredible patience, waiting another century is like a nanosecond from where I hail from.

When the 100% connected threshold is reached, it will be the first time in humanities existence, what you call a “global community,” that every surviving person will be able to obtain, exchange & disseminate information with each other. Not only is that a highly creative feat, but an attainable endeavor I did not think possible at your stage of evolutionary development. Not that I thought humanity was incapable of such an accomplishment, but I did not think your species was stupid enough to create this metaphorical connected thread in a virtual environment. Moreover, what is a virtual environment? Simply stated, a virtual environment is imitation or facsimile of reality that creates an illusion.

Dark Side of Cyberspace

Virtual environments and virtual worlds are not “real” in the concrete sense or actual physical places. Your virtual world is nothing more than a series of electronic impulses passing through at least one digital device up to billions of them. Furthermore, even though your species knows this, you have become so enamored with ICT that you have defined your societal period as the Information Age & Information Revolution. Without sounding facetious again, I think you should call it the Disconnected Age. Only humans could invent a technology with social media being a central theme that, instead of connecting humanity, has slowly fragmented and disconnected interpersonal relationships, families & communities.

Why any living organism would invent and become addicted to an artificial facsimile when they have the original is beyond me. But then again, I am not human. So how could I understand? Although I find your new dependency on ICT & cyberspace utterly ridiculous and short sighted, I support you 100%. For it is only in cyberspace that humans can legally deceive others without fear of consequences. Only in cyberspace, a 50-year-old man, who is severely disturbed, can create a “virtual identity” and enter chat rooms as a 15-year-old high school freshman looking to meet other young males and females to fraternize with. How wonderful is that and I give you a standing ovation.

“I thought I was the only one who could successfully cloak his identity, so others would feel completely at peace in my presence. I guess I am slowly succeeding in getting humanity to understand the multitude of benefits living life governed by deceptive practices. Thank your God for the Information Age!” iPredator

When I think of how many times, I have had to cloak my identity throughout history, I cannot even begin to tabulate the number of times and methods of deception used. If I were to offer a rough estimate, using a term from your dimension, I would have to say approximately a Zettabyte, give or take an Exabyte or two. If you are not familiar with the term, even though it applies to your addicted habits, it refers to a quantity of information or information storage capacity. Can you calculate, conceptualize or fathom the number 1021?

In fact, one of your largest and most respected techno-centric companies, Cisco, reported in 2016, global internet traffic reached a staggering 1.3 zettabytes annually. They have called this time in your Information Age the “Zettabyte Era”.

This is wonderful given I estimate a 100% connected threshold by 2200. Much faster growth than even I had predicted. How industrious you have been, which is both impressive & remarkable. To help you understand using your present-day nomenclature, 1.3 Zettabytes is the equivalent of 38 million DVDs of information exchanged per hour.

It is easy to become perplexed thinking about those numbers, but the 100% connected threshold is a short distance from today and the mere thought of this time causes me to salivate with anticipation. Within cyberspace and the internet, there are no police, law enforcement entities, guardians or even archangels. Not that there is such an entity, but St. Michael, the Warrior Prince & Archangel, is nowhere to be found either. As I have stated above, “How wonderful is that and I give humanity a standing ovation.”

In cyberspace and within you, I reside. Within each human, lying deep within your psyche is a place of darkness and malevolence. Unfortunately, most of you are ignorant to this realm and even fewer of you act upon my callings and commands. Thankfully, the Information Age and your addiction to technology has opened your eyes to my ways of thinking and perceiving. Depending on your beliefs, you may call it evil, psychopathy or profound immorality. You may also place the nature of evil in four differing camps: Moral Absolutism, Amoralism, Moral Relativism and Moral Universalism. Whatever your definition is and how you describe how malevolence manifests, cyberspace is a realm where I can relax in peace and travel without worry of identification or apprehension. In addition, because I dwell in all of you and in cyberspace, I can see the fruits of my labor.

“Fear is pain arising from the anticipation of evil.”

From a macroscopic perspective, a growing portion of humankind is becoming increasingly narcissistic, isolated, disconnected and divorced from reality due to your increasing compulsive dependency on ICT. Instead of using ICT for good and benevolent causes, many of you have chosen a nefarious and malevolent trajectory. As iPredator, I welcome your chosen path and will do my best to ensure you do not deviate or change your mind once you cross my bridge. I will always be waiting with open arms and a warm embrace welcoming you to my kingdom.

If you have not noticed, I have infiltrated the hearts and minds of many of your fellow citizens. Moreover, as always, I do not discriminate due to age, gender, race, religion or socioeconomic status. Although I will remain hidden, undetected and quiet, I have injected my will and venom inside 1000’s, and soon millions, of people worldwide. Just as my servant, cancer, knows how to metastasize, I have used cyberspace and ICT as devices for transport to spread from one part of your mind to another, from one person to another and from one community to another.

My home lies within your soul, mind and conscience. And thanks to ICT, the internet and cyberspace, my capacity to spread hatred, harm and disdain for one’s fellow man has accelerated exponentially. Within the real universe, most space is desolate, cold and void of life. As dark as that may sound, it is nature and not filled with anything nefarious. Within cyberspace, and because it is manmade and uncharted it is teaming with people filled with malice, deviance and what you call evil.

My true work of art is how I have been successful in persuading “kindhearted” people to engage in harmful online activities cloaked by moral turpitude, religious conviction & self-righteousness. This growing segment is ignorant to their actions because they honestly believe it is either the right thing to do or the last option. In fact, both segments, whether motivated by criminal or deviant drives or righteous indignation, are easily swayed into practicing Cyberstealth.

“The mind is its own place, and in itself, can make a heaven of hell, a hell of heaven.”

Cyberstealth is an Information Age method and/or strategy by which criminals, deviants, severely disturbed and the misguided use ICT to establish and sustain complete anonymity while they troll, stalk and attack their target. Given the Internet inherently affords everyone anonymity, Cyberstealth ranges from negligible to extraordinarily complex and multi-faceted. The rationale for using “stealth” in the suffix of this term, serves to remind you the primary intent fueling those that seek to harm others using ICT.

This intent is to hide their identity by designing false online profiles, identities, covert tactics and methods to ensure their identities remain concealed reducing their probability of identification, apprehension and punishment. Therefore, as the internet naturally offers all ICT users anonymity if they decide, many actively design online profiles and diversionary tactics to remain undetected and untraceable. Cyberstealth is a covert method allowing them to establish and sustain complete anonymity while they engage in ICT activities planning their next assault, investigating innovative surveillance technologies or researching the social profiles of their next target.

Not all humans use Cyberstealth nor attempt to cloak or hide their identities. Many actively exhibit their identity, because for them, they are driven by martyrdom, a need for recognition, peer acceptance or deep-seated inadequacies. What better cocktail of perceived low self-worth than a person driven to assault others motivated by inadequacy. If you cannot tell, I am quite excited to have been invited back to your dimension. Especially since it looks as if a greater number of people are using ICT for reasons other than what it was intended to accomplish.

As it is not hard to undo the damage that has been done by the misuse and prostitution of ICT, I remain confident humanity will sustain its self-destructive trajectory. All that is required now to seal humanities fate in dark psychological spheres is a national tragedy caused by a cyber terrorism attack. All any nation requires to attack and destroy another nation is a reason. A cyber terrorist attack would accomplish this goal and inevitably lead to a global military engagement.

As I could go on for pages writing about my hopes for humanity and its demise and without going into a long diatribe, I present for you brief definitions of iPredator and Dark Psychology. Both concepts are easily understood, easily confronted and capable of being thwarted. Fortunately, humanity is not likely to heed my warnings until many people have been devastated and a war spawned by cyber terrorist attacks ensues. I yearn for that day.