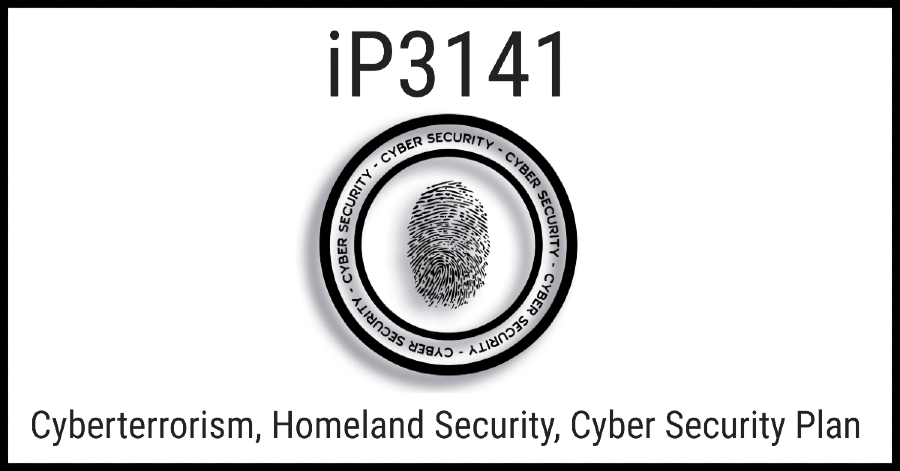 iP3141 is a national homeland security, cyber security & cyberterrorism prevention initiative developed by NYS licensed psychologist and online safety educator Michael Nuccitelli, Psy.D. As part of iP3141, he has designed a template that will reduce the probability of a cyber-terrorist attack, increase homeland security information dissemination speed, assist the cyber-attacked and ignite an Information Age educational movement. Provided is a brief overview of iP3141.

iP3141 is a national homeland security & cyberterrorism prevention initiative developed by NYS licensed psychologist and iPredator concept author Michael Nuccitelli Psy.D. Considering the growing reports that America is at risk for a cyberterrorism attack and what authorities have termed a “Cyber Pearl Harbor“, this writer proposes a plan that will reduce the probability of a cyber-terrorist attack, increase homeland security information dissemination speed, and ignite an Information Age educational movement in the United States. Secondary to this mission and just as vital is to provide a physical county center for Americans to visit if being cyber-attacked, which is dealt with seriously and promptly.

iP3141 is a national initiative to establish an educational, homeland security and cyber-attack prevention professional and public sector network to service, educate & monitor Americans of the 3141 counties. The National Conference of State Legislatures defines cyberterrorism as the use of Information and Communications Technology (ICT) by terrorist groups and individuals to further their agenda.

This can include use of ICT to organize and execute attacks against networks, computer systems and telecommunications infrastructures or for exchanging information or making threats electronically. Examples are hacking into computer systems, introducing viruses to vulnerable networks, web site defacing, denial-of-service attacks, or terrorist threats made via electronic communications.

According to the FBI, cyber terrorism is any “premeditated, politically motivated attack against information, computer systems, computer programs and data which results in violence against non-combatant targets by sub-national groups or clandestine agents.” As the author of iPredator, cyberstalkers, cyber terrorist, cybercriminals and the ideologically extreme are just a few typologies who victimize others using ICT. Information Age society has drastically changed, becoming more isolated and disconnected leading to a change in basic assumptions about violence, crime, and deviance. 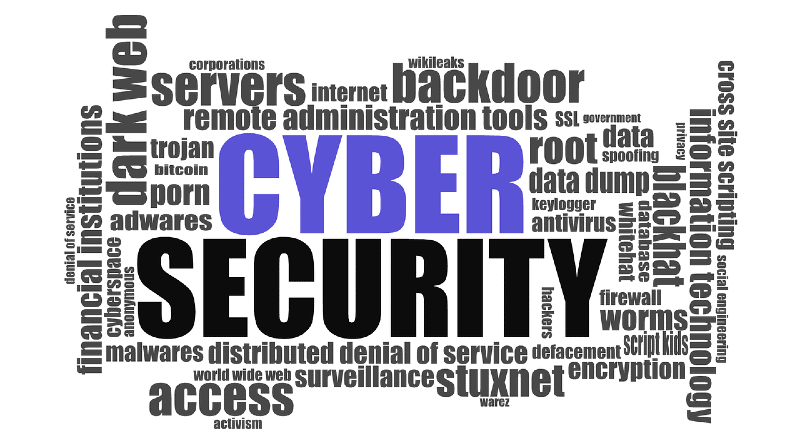 Cyberterrorism has multiple definitions and applies to a variety of cyber-attack intricacies that may involve one online assailant or many. As a typology of iPredator, Cyberterrorism is defined as the cognitive, affective, behavioral, and perceptual factors of terrorist groups or their agents, who use of Information and Communications Technology (ICT) to impair, harm or destroy another group of individuals. Cyberterrorism is different from activism, hacktivism, and cybercrime.

More specifically, cyberterrorism attempts to interrupt, destroy, or exploit another group or nation’s ICT vulnerabilities to adversely affect their critical infrastructure. The targets cyber terrorists mostly attack are civilian populations and governments. The target is not one individual, but groups, communities, regions, and nations. Furthermore, cyberterrorism, as an iPredator typology, requires the terrorist group or their agents to meet three criteria as follows:

Although these three factors are broad and could easily include activists, hacktivists and cybercriminals, cyberterrorism focuses on causing harm to others by adversely affecting a target group’s ICT networks and critical infrastructure. As humanity becomes more reliant upon ICT, ICT networks and critical infrastructure are synonymous. Like the classic definition of pre-Information Age terrorism, cyber terrorists target civilian populations or those not engaged in active combat. As stated, cyber terrorists use ICT to harm civilian and commercial systems, which directly or indirectly creates an instant or substantial risk to national security.

As the internet naturally offers all ICT users’ anonymity, iPredators actively design online profiles and diversionary tactics to remain undetected and untraceable. Cyberstealth is a covert method by which iPredators can establish and sustain complete anonymity while they engage in ICT activities planning their next assault or researching the social profiles of their next target. From a nationalistic perspective, industrialized nations must now allocate increasing amounts of time, money, work force and strategic planning on cyberterrorism prevention.

Needing to be addressed is the growing concerns of homeland security, cyberterrorism, and cyber warfare all due to social media and the speed and magnitude of ICT. In addition to cyber threats to our national security, it is fair to assume iPredators and iPredator groups will become willing activists attempting to access and design larger and more deadly forms of cyber aggression. Social science experts and educators have attempted to enlighten and warn the global community, but their impact to date pales in comparison to the wrath and inevitable growth of the threat of iPredator and the growing number of iPredator groups.

In addition to assisting citizens, this writer’s mission is to initiate a nationally sustained educational & awareness campaign for what could be called the “USA iP3141 National Network“. Once implemented, the mission of the iP3141 Network is to increase awareness of the benefits and dangers of Information and Communications Technology (ICT), decrease rates of cybercrime and human online victimization, educate citizens about homeland security, and significantly increase education & awareness of pediatric online users via an ICT educational curriculum covering iPredator issues.

There are 3,141 counties in the United States. This may change but 3141 is the estimate as of 2021. The letter “i” in iPredator stands for Information and Communications Technology. Cyberterrorism is one typology of the iPredator concept. Hence, “iP3141” is the tentative name of Dr. Nuccitelli’s initiative. A brief description of Information and Communications Technology is as follows:

Information and Communications Technology (ICT): Defined as “the role of unified communications and the integration of telecommunications (telephone lines and wireless signals), computers, middleware as well as necessary software, storage- and audio-visual systems, which enable users to create, access, store, transmit, and manipulate information. In other words, ICT consists of IT as well as telecommunication, broadcast media, all types of audio and video processing and transmission and network-based control and monitoring functions.” (Wikipedia)

Within each county, county equivalent and the United States, there would be the following:

The iP3141 plan is a work in progress and requires local, state, and federal assistance. To make this happen, this writer seeks proactive citizens and organizations to encourage a national discussion. In addition to the obvious benefits to Americans, Dr. Nuccitelli predicts it would help create new employment opportunities, expand homeland security awareness regarding cyberterrorism and cyber security threats, create a centralized forum for exchange of ICT, inspire educated consumerism for ecommerce & m-commerce and place the United States in the forefront globally in online safety. Given that the rapid expansion of information technology is both happening and inevitable, this writer would like to see the United States initiates steps to develop a resilient Cyber Ecosystem. 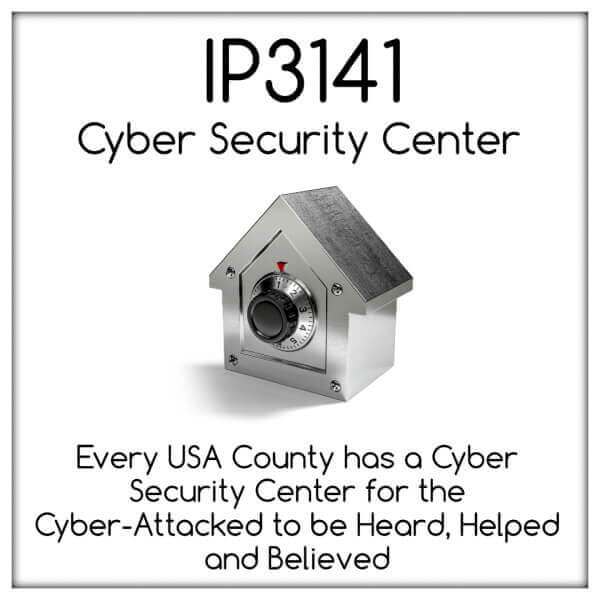 Just as important to homeland security is cyber security for all Americans. With a center in every county, an online user could finally get the help they need when being cyber-attacked, character assassinated, blackmailed, and victimized. Given it would be federally, state, and privately funded, all services would be free. An online user could visit the center, meet with a trained professional and be advised accordingly. No longer would the cyber-attacked be subjected to allegations of being psychopathological and histrionic.

Given we live in the Information Age, they would also not be directed to delete their accounts and stay off the internet. The online user would be heard, helped, educated, and supported if law enforcement or court systems are to be accessed. At present, thousands if not hundreds of thousands of Americans are cyber-attacked and victimized with little to no help. It is time for the United States to prioritize cyber security for its citizens and this country.

“See or Cyber Saw Something? Say Something”

With 3141 county centers across the United States, a proactive American could quickly report suspicious activity witnessed offline and online.

Note to Reader: To anyone who reads this brief introduction to iP3141, feel free to contact this writer with on how to encourage a national discussion and steps to establishing the iP3141 Network. As the iP3141 would be funded by local, state & federal agencies, the potential for creating employment opportunities would be tremendous. 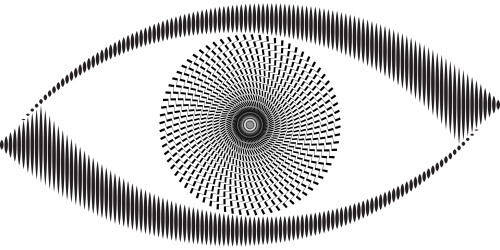