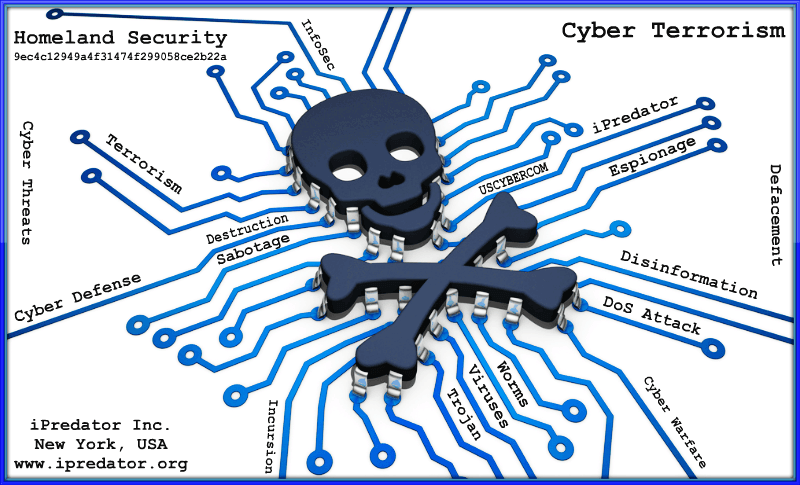 Cyber terrorism has multiple definitions and applies to a variety of cyber-attack intricacies that may involve one online assailant or many. As a typology of iPredator, Cyber terrorism is defined as the cognitive, affective, behavioral and motivational factors of terrorist groups or their agents who use Information and Communications Technology (ICT) to impair, harm or destroy non-combatant targets.

Cyber terrorism is different from activism, hacktivism and cybercrime in that the primary purpose of a cyber terrorist attack is to cause physical violence or extreme financial harm. According to the U.S. Commission of Critical Infrastructure Protection, cyber terrorist targets include the banking industry, military installations, power plants, air traffic control centers, and water systems.

More specifically, cyber terrorism attempts to interrupt, destroy or exploit another group or nation’s ICT vulnerabilities to adversely affect their critical infrastructure. The targets cyber terrorists mostly attack are civilian populations and governments. The target is not one individual, but groups, communities, regions and nations. Furthermore, cyber terrorism, as an iPredator typology, requires the terrorist group or their agents to meet three criteria as follows:

Although these three factors are broad and could easily include activists, hacktivists and cybercriminals, cyber terrorism focuses on causing physical harm to others by adversely affecting a target group’s ICT networks and critical infrastructure. As humanity becomes more reliant upon ICT, ICT networks and critical infrastructure are synonymous. Like the classic definition of pre-Information Age terrorism, cyber terrorists target civilian populations or those not engaged in active combat. As stated, cyber terrorists use ICT to harm civilian and commercial systems, which directly or indirectly creates an instant or substantial risk to national security. 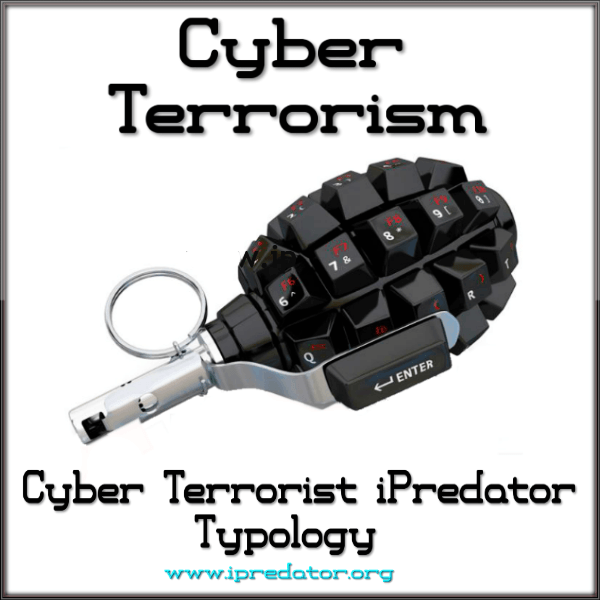 What is Cyber Terrorism

Cyber Terrorism: Cyber Terrorism is defined as the use of Information and Communications Technology (ICT) by iPredators, organized groups and/or terrorist groups to advance their agenda motivated by religious, political and/or philosophical ideologies. Examples of cyber terrorism include:

1. The use of ICT to organize and execute attacks against networks, and Information and Communications Technology (ICT) infrastructures.
2. The exchanging of information or making threats electronically.
3. The act of hacking into computer systems.
4. Introducing viruses and malware to vulnerable networks.
5. Defacement of websites and blogs.
6. Denial-of-service attacks.
7. Terroristic threats made via electronic communication.

When strategic cyber-attacks are motivated for financial gain, these attacks are defined as cybercrime. Cyber terrorism is a premeditated political, religious or philosophically motivated attack against information, computer systems, computer programs and data, which results in violence against non-combatant targets by sub-national groups or clandestine agents.

A cyber terrorist attack is designed to cause physical violence or extreme financial harm to the targeted victims or the community. According to the U.S. Commission of Critical Infrastructure Protection, cyber terrorist targets include the banking industry, military installations, power plants, air traffic control centers and water systems. The F.B.I. define cyber terrorism as “The premeditated, politically motivated attack against information, computer systems, computer programs and data which result in violence against noncombatant targets by sub-national groups or clandestine agents.” Cyber Terrorism is one category of iPredator that will continue to grow with the expansion of Information and Communications Technology.