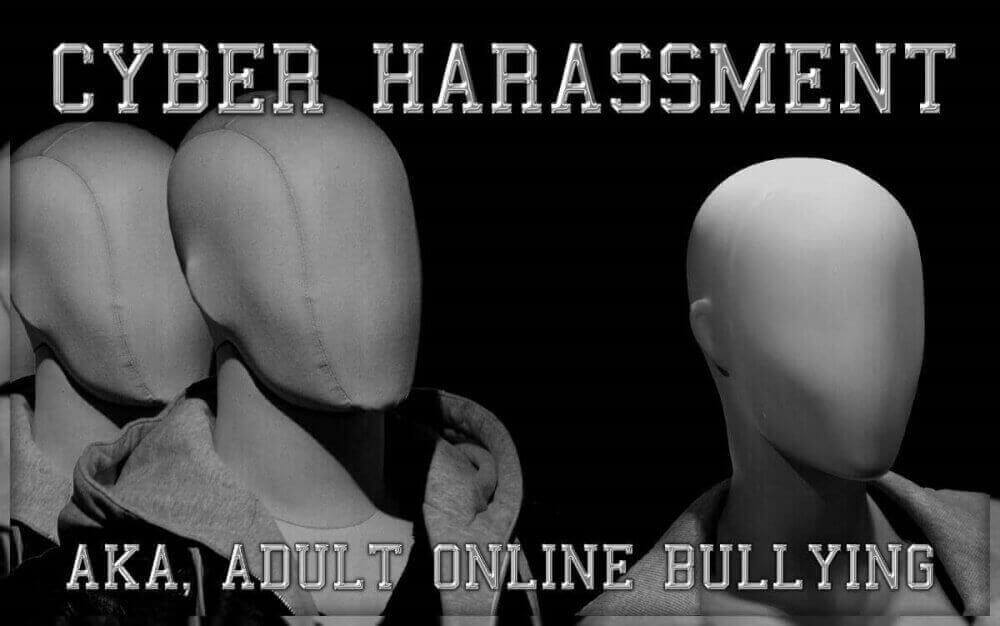 Cyber Harassment is the use of Information and Communications Technology (ICT) to harass, control, manipulate or habitually disparage a child, adult, business or group without a direct or implied threat of physical harm. Unlike physical harassment involving face-to-face contact, cyber harassment requires the use of ICT and is verbal, sexual, emotional or social abuse of a person, group or organization. The cyber harasser’s primary goal is to exert power and control over the targeted victim(s).

When minors are involved, Cyberbullying is the term describing Cyber Harassment and when direct or implied physical harm to the targeted victim(s) is involved, Cyber Harassment becomes Cyberstalking. Another similar term often used to define Cyber Harassment, but slightly different in assailant modus operandi, is Internet Troll. For clarification, a brief definition of the five related concepts and internet defamation is as follows:

Cyberbullying: Cyberbullying is the use of Information and Communications Technology between minors to humiliate, taunt and disparage one another. Cyberbullying is intended to tease, embarrass, deprecate & defame a targeted minor with the assailant’s developmental needs for peer acceptance and recognition being a priori. Dissimilar to physical bullying, cyberbullying does not involve face-to-face contact and primarily occurs online using electronic devices as the tools for information dissemination.

Internet Troll: An Internet Troll is a colloquial expression used to define an online user who uses Information and Communications Technology (ICT) to purposely and actively provoke, defame, anger, tease, flame, or incite other online users. Often, the Internet Troll does not know the target recipient(s) of their vitriolic statements and behaviors. Internet Trolls regularly appear in all forms of online mediums ranging from online video gaming gatherings to chatroom and forum discussions. When the Internet Troll’s inflammatory statements and actions do not include a direct or implied physical threat to the target(s), their behavior is categorized as cyber harassment.

If the Troll’s verbal assaults include direct or implied physical threats to their target(s), their actions are then defined as cyberstalking. The motivations for an Internet Troll’s provocative, and often, bizarre behaviors are numerous. Despite the variations in modus operandi, most Trolls are seeking attention, recognition, stimulation pseudo-notoriety and retribution for some unknown perceived injustice. Although there is no hard evidence or clinical research validating the psychology of the Internet Troll, it is commonly believed that the “Veil of Anonymity” afforded to every online user inspires some to engage in egregious behaviors.

Of the four typologies presented, the Internet Troll is least likely to know the identity of their targeted victim(s) and least likely to be persistent and repetitive in their online assaults with the same online user(s). Although Cyberbullying, Cyber Harassment and Cyberstalking can be initiated by unknown assailants, Internet Trolls are most likely to view their maladaptive online exchanges as being part of an illusionary game. 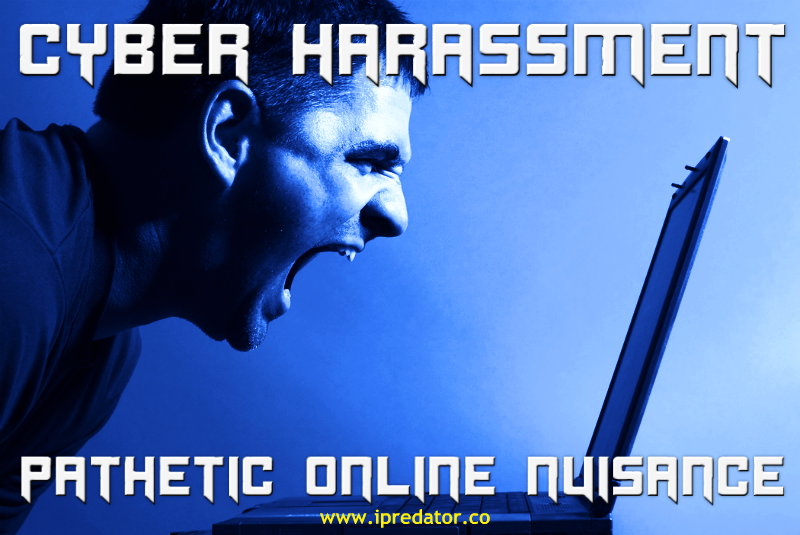 As stated above, Cyber Harassment is an assailant’s use of ICT to harass, control, manipulate or habitually disparage another online user without a direct or implied threat of physical harm. Unlike physical harassment involving face-to-face contact, Cyber Harassment requires the use of ICT and is verbal, sexual, emotional or social abuse of a person, group or organization. The Cyber Harasser’s primary goal is to exert power and control over the targeted victim(s). When both the assailant and target are minors, Cyberbullying is the appropriate term.

Cyber Harassment is one typology included in the global technological predator construct, iPredator, authored by this writer. Cyber Harassment, Cyberbullying, Internet Trolling and Cyberstalking are often used synonymously to describe online activities that include an assailant(s) targeting a victim(s) using aggressive information technology tactics. Given the list of online forums in which Cyber Harassment may occur, it is fair to assume “all” online forums and “all” electronic devices, internet enabled or not, are potential venues for this Information Age abuse. For any person, business or group who suspects they are being Cyber Harassed, it is vital to check their state statutes defining these laws.

Internet Defamation (aka, Online Defamation) is a felonious statement of fact using Information and Communications Technology (ICT) that is published or disseminated to a third party in a careless or intentional manner and causes injury or damage to the subject of the statement. Internet Libel and Slander are diverse types of Defamation. Libel is a written defamatory statement, and slander is an oral defamatory statement.

Given the citizens of the United States are granted the constitutional right to freedom of speech, successfully making an online assailant criminally or civilly liable remains extraordinarily difficult at present. Prior to the Information Age, harassment, bullying and stalking were apparent, but confined by time, geographic location, victim access and frequency.

With the advent of the internet, social media and mobile device technology, these forms of abuse have become around the clock activities leaving minimal respite for the victim. Having access to a multitude of digital devices combined with online forums to carry out harassment, the victim has no sanctuary or avenues for escape. 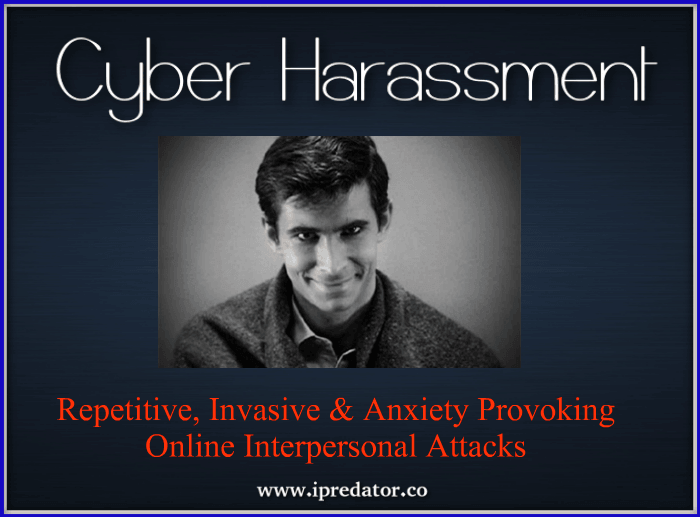 Welcome to the Information Age Revolution!

Although contemporary humanity is at the beginning of Information Revolution, information technology, social networking and cyberspace are rapidly becoming part of the human experience on all fronts. To suggest to a Cyber Harassment victim to merely “turn off the computer” or “delete all social profiles” as the solution to ending their attacks is ridiculous to say the least. Information and Communications Technology, the internet and daily human functioning, in industrialized nations, is rapidly becoming inseparable. Just as mechanization of the Industrial Age changed the human experience, the Information Age has followed suit.

The Information Age offers humanity incredible opportunities and benefits evidenced by each passing year bringing new types of technologies and online forums enhancing societies quality of life. As with all societal advancements, since the beginning of human civilization, all positive advancements have negative attributes hidden within their proverbial equation. For the Information Age, the negatives occur within the abstract and artificial universe, called cyberspace, where the “veil of anonymity” has turned some segments of society into seemingly demonic entities.

Whether it is defined as the disinhibition effect, deindividuation, internet addiction or a plethora of other psychological and sociological constructs attempting to define how cyberspace influences human behavior, defining why cyberspace encourages people to become malevolent is elusive at present.

Cyber Harassment is but one of an entire cornucopia of negative interpersonal online activities whereby one user is the assailant and the other online user is the targeted victim. Without attempting to be reductionist, Cyber Harassment, Cyberbullying, Cyberstalking and Internet Trolling all involve an assailant(s) motivated by the need for power, control and domination over their chosen target. The details of nefarious online activities may vary, but the intrapsychic drives are the same.

“At first perception, it seems as new Information Age technological advancements appear seemingly “heaven sent”, but all too often presents the human experience with an increasingly primitive and maladaptive response suffocating the realms of common decency, respect and humility.”  Michael Nuccitelli Psy.D. (2013).

Cyber Harassment is the art and science of one or more online users attempting to psychologically devastate another online user(s). The drives fueling assailants fall upon a broad cognitive, affective and perceptual spectrum ranging from love to hatred, from sane to insane and from criminal to charitable. Lying upon a vast spectrum of motivation to harass other human beings is as age old as civilization itself.

Unfortunately, what is not as old as humanity is the emotional and psychological toll the victim experiences from habitual and unpredictable cyber-attacks. Never has an assailant had the opportunity to carry out their malevolent desires upon a victim 24 hours a day, 7 days a week and 365 days a year if they so decide. It is only since the birth of the Information Age that the dark realm of the human mind has flourished into what this writer calls, the Dark Side of Cyberspace.

From exhaustive research and professional experiences, interacting with both victims and assailants of online victimization has led this writer to conclude there are three primary arenas, which differentiate common online human neurotic states from criminal, deviant and psychopathological manifestations of Cyber Harassment, Cyberstalking, Cyberbullying and Internet Trolling.

These three areas are Persistence, Repetition & Perceptual Distortions. This triad could be the three arenas, which law enforcement and the judicial system defines when the constitutional right of all Americans to practice freedom of speech is no longer honored or a protected right, but a criminal and highly destructive behavior requiring admonishment and swift punishment. 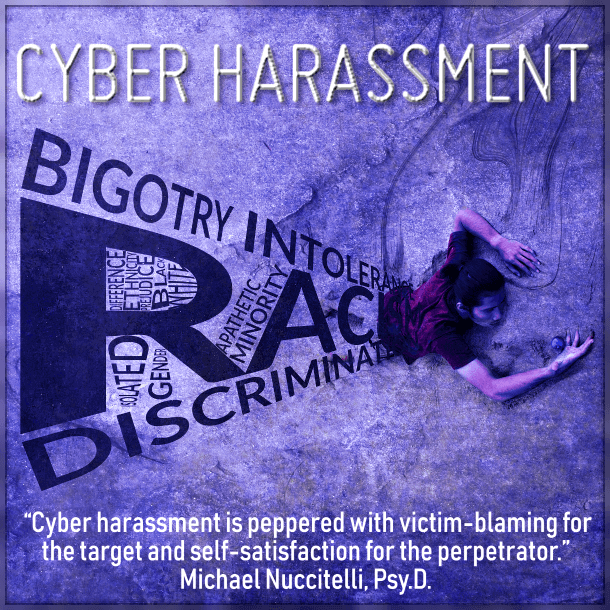 The iPredator also uses Cyberstealth to cloak his/her identity, if warranted, as well as ensuring he/she will not be apprehended and punished. In relationship to Cyber Harassment and the related activities described above, a brief description of Persistence, Repetition & Perceptual Distortions is as follows:

I. Persistence: Time and duration between online assaults and refusal to refrain from contacting the victim are the three elements assessed in the arena of Persistence. If the assailant(s) consistently exchanges or disseminates negative or fear inducing information about the victim on three or more occasions over the course of a calendar month or persists in their vitriolic online attacks, despite documented directives to cease and desist after the first time, the assailant meets criteria for criminal and/or civil involvement.

II. Repetition: Frequency of online assault themes are the arena in which the Repetition factor is assessed. Assuming the information the assailant exchanges or disseminates is negative or victim fear inducing, the number of times the information is known to the victim is the deciding factor. If the theme of the negative information involves in any way, shape, manner or form direct or indirect physical harm to the victim, their loved ones or their property that could cause them physical harm, on more than one occasion, is grounds for criminal and/or civil litigation. If the theme of the negative online information exchanged or disseminated does not involve a direct or indirect physical threat of harm, three or more times meets criteria for criminal and/or civil involvement.

A. Known or suspected assailant perceptual distortions are hypothesized and compiled by the victim(s). If the victim(s) does not know the identity of the assailant, the online negative information content themes and patterns of Persistence and Repetition factors are used to compile a high probability Assailant Perceptual Distortions Profile.

B. Known or suspected victim perceptual distortions are hypothesized and compiled, not by the victim, but by a known and trusted loved one or associate known to the victim. Although it is always clear that the aggressor is 100% responsible and culpable for their offending actions, assessing the victim’s Perceptual Distortions can assist in defining the intent of the assailants.

By using the variables of Persistence, Repetition & Perceptual Distortions, the victim and supporting victim agents can quickly define the severity of the online attacks. As it is clear to presume that the Information Age, cyberspace and technological advancements will continue to flourish for centuries to come, the question requiring immediate focus is answering how to squelch the growing segment of humanity using information technology and cyberspace for selfish, criminal, deviant and anti-social endeavors.